Changes in the new edition of The Victorian Romantic Tarot

PLEASE NOTE. The Shopify blog software does not allow us to reply to comments (I know, I know...)
We are working on putting in a special app to allow us to do this - please bear with us and we will soon be able to reply properly. Thank you to everyone who has taken the time to comment.


(updated 12 /08/2021)
We know that there is a lot of excitement in anticipation of the fourth edition of this much-loved deck. So we thought we'd take you through some of the ways we are planning to make the deck very special.

We’ve changed the print company that we are using for this edition (it’s actually the same company that did The Fantastic Menagerie Tarot for us). They deal with cold-stamping slightly differently, so we have redesigned the cold-stamping on every card. The effect of this is to give more cold-stamped areas on every image. The way we design our cold-stamping is quite complex, as it’s integrated into the graphics, rather than being flat “gold” areas – this means that we can use a whole range of “metallic” (the technology actually does not use metallics, but gives that impression) colours. The overall impression can be quite spectacular, but it IS hard to find printers who can deal with something this intricate – one reason why we won’t be continuing in tarot design for very much longer.

It's almost impossible to give a good impression of the cold-stamping effects in a still photo, but we hope that the three cards below (from our sample run, so they will be very close to the final cards) give some idea of the way in which the metallic colours jump forward when the card is at an angle - it's very dynamic when you are handling the cards and can give an almost three-dimensional feeling. 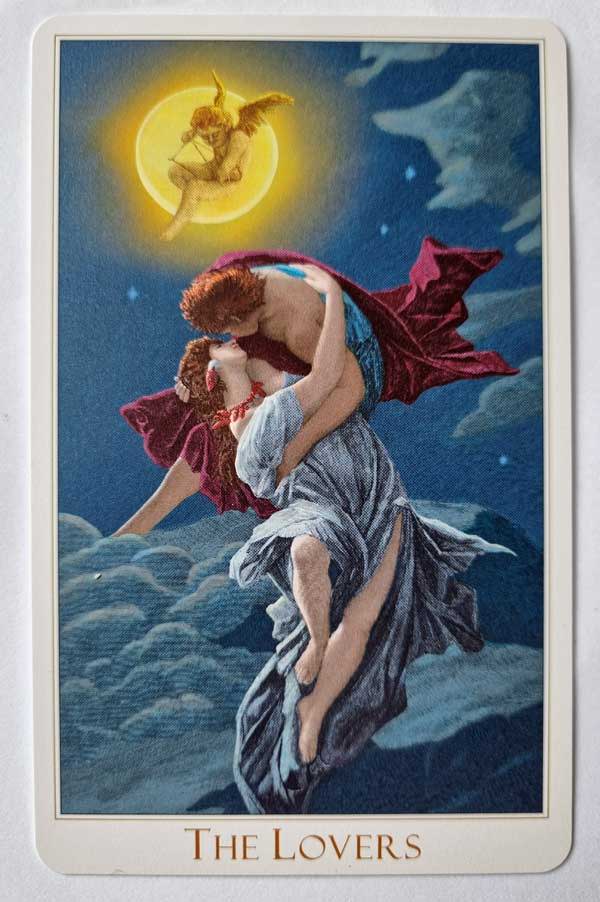 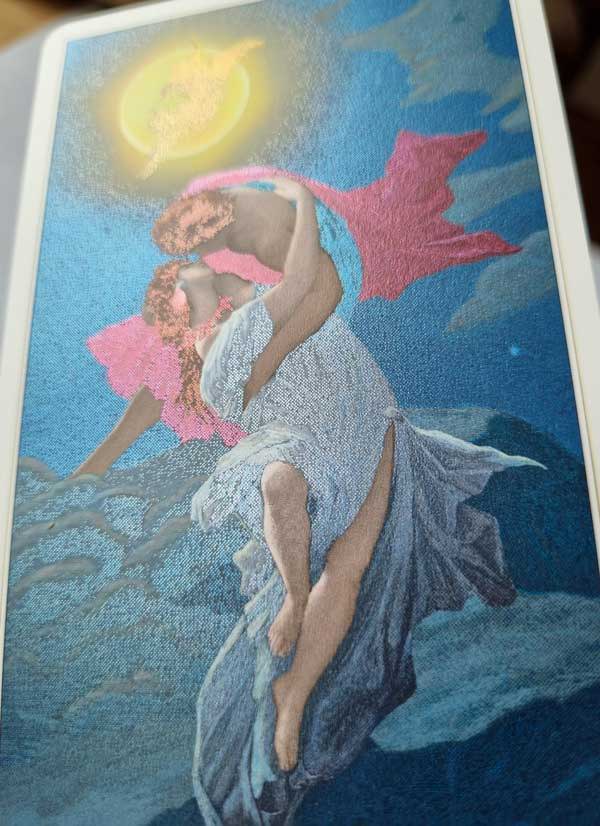 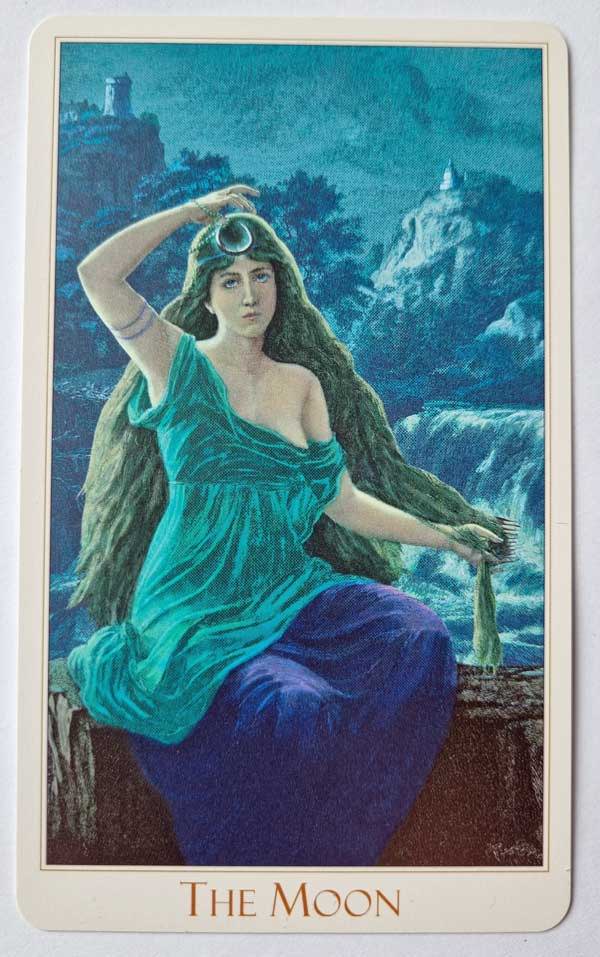 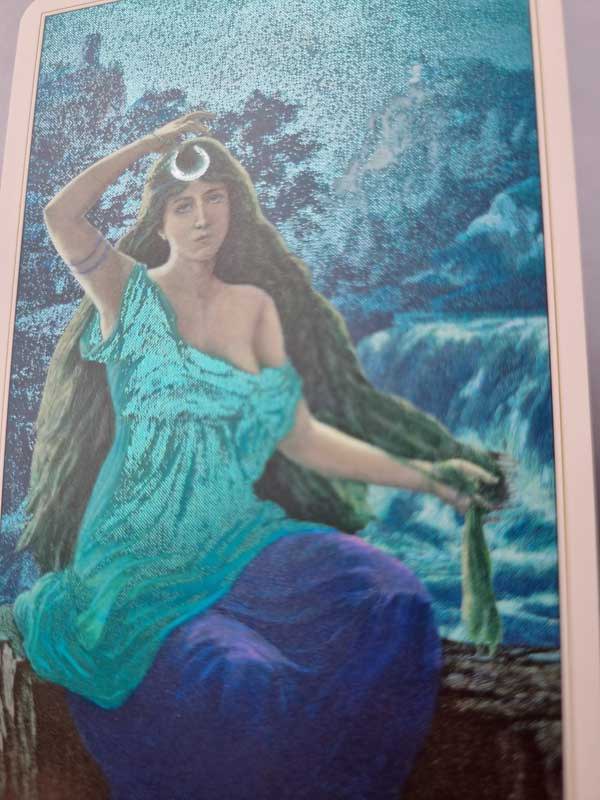 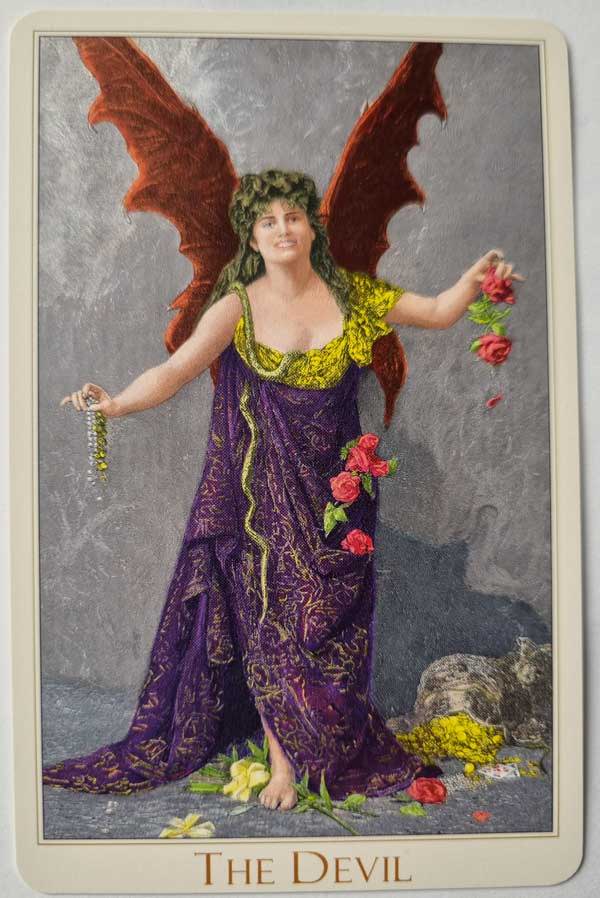 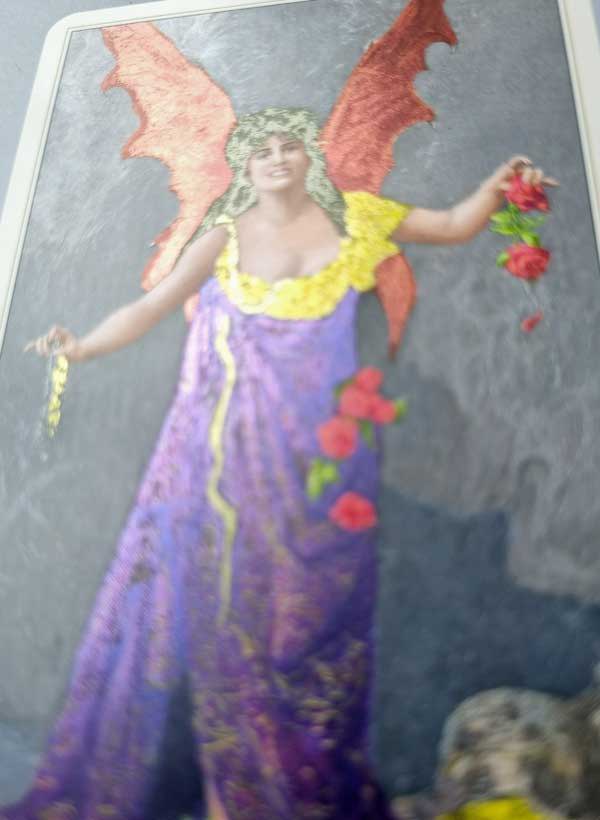 There has been, rightly, a lot of discussion about diversity in tarot in recent years. It’s something we’ve been aware of since we made our first deck. However, because for this deck we worked mostly with historical material, the opportunities for diversity have been limited – though we have been mindful of including diverse characters and scenes whenever we can.

Now, though, we are doing what may be the final reprints of some of our decks and so we want to make these as good as they can possibly be. It means that for our decks that show human characters we have revisited issues of diversity.

For the original Victorian Romantic Tarot we wanted to reflect our central European home and the history of the art that reflected the history of the Romantic period in the Austro-Hungarian empire. We therefore strictly used only Czech, German and Austrian portfolio books for all the source material - the first eighteen months of the project back in the early 2000s consisted of us tracking enough of these down to make the deck, which proved to be quite a task!

Going through the original books recently, we found an old post-it on an image that Karen marked as “Queen of Pentacles” way back in 2005. It was one of two images by Harry Roseland that were in one of these portfolio books from the late 19th century. You can see both images below. So back then we were mindful of wanting to include people of colour in the deck. But we simply didn’t, at that stage, have the level of illustration skill to incorporate parts of the imagery without it looking very collaged (something Alex wanted to avoid) – and neither of the two pictures were in a format we could use “as is”. Harry Roseland was also in copyright until 2020. Although copyright rules are different for engravings (they are derivative rather than original works) and we might have been able to argue that the engraving was public domain in the early 2000s, we were not confident about this - another reason the image didn't get into the deck.

So after a lot of debate the Roseland images weren't used. We were however, able to choose a distinctly non-Christian scene for The Hierophant, choose an Egyptian Emperor and later to add a man of colour as the horn player in the Three of Wands. There are also other characters in the deck that can be read as Roma, from the Caucausus, Turkey and other regions fairly close to central Europe. So we managed some diversity, but but it’s been great to be able to improve and add more in this new edition. 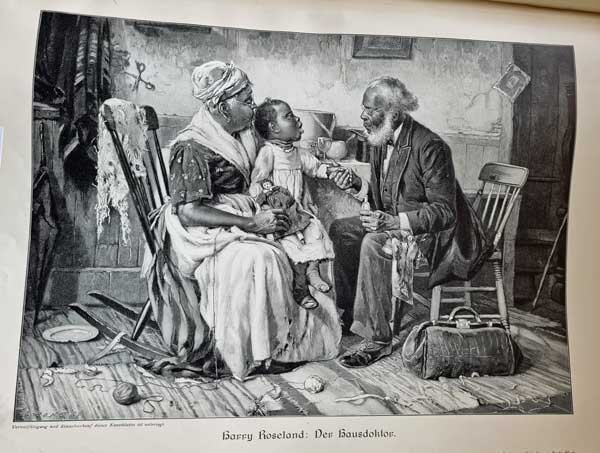 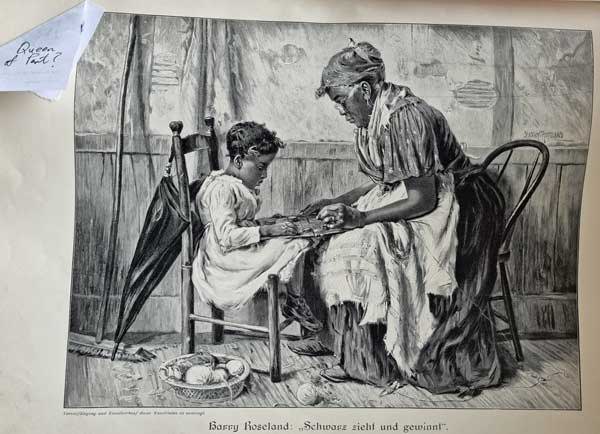 We’ve therefore – and using our improved illustration skills – incorporated a wider range of people into this fourth edition of the deck. Our source material is the same – we want to keep to our original vision of a “homage” to the history of popular central European art of the Romantic period. But we have – in as natural a way as we can – included more non-white, non-Europeans. It’s not easy to get this right because, unsurprisingly, for 19th century books from the region, the artwork is overwhelmingly of white, middle-class people and where people of colour were shown, they were often depicted as “exotics”, slaves or enemy soldiers, rather than as ordinary characters. We don’t want to perpetuate this kind of viewpoint. So we have done what we can to balance the need to be true to the 19th century source material, while at the same time introducing diversity in a sensitive way. We hope it’s a small contribution to current awareness. 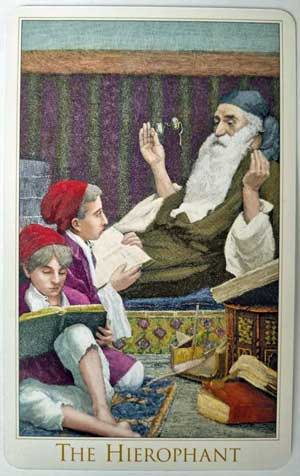 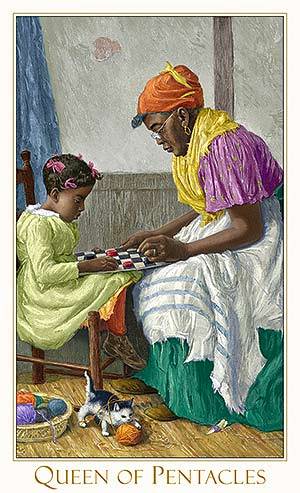 The Hierophant card has been in all editions of the deck. This version of the Queen of Pentacles didn't quite make it into the first edition, but is now finally in the fourth edition.

We have made three completely new cards for this fourth edition of The Victorian Romantic Tarot in addition to cards with smaller changes. One of these new images is the Queen of Pentacles, that you can see above. There are also two other new cards, the Page of Swords and the Queen of Wands. 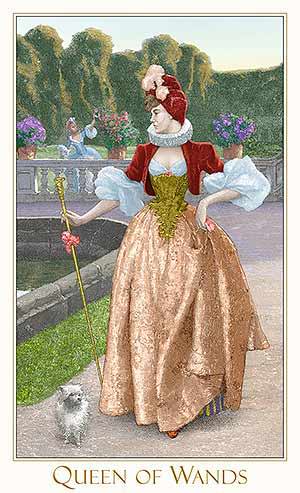 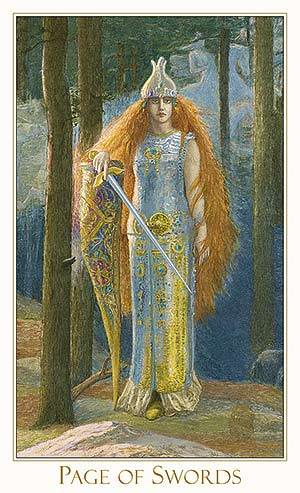 We're delighted to say that we have been able to continue in our tradition of adding extra cards to this deck. These extra cards are of course cold-stamped, though we can't show the effect until the deck has actually been printed. You will have to imagine the gleaming "metallic-effect" highlights!

The extra cards in both the standard and the limited edition will be: 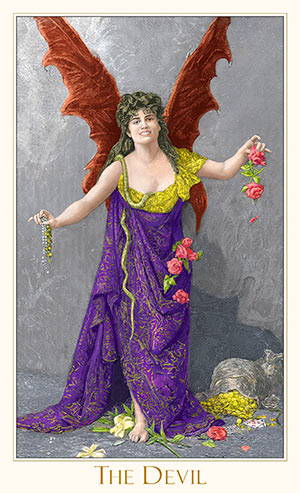 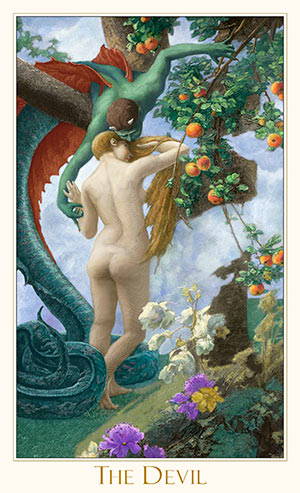 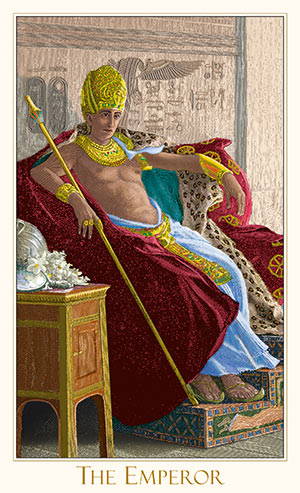 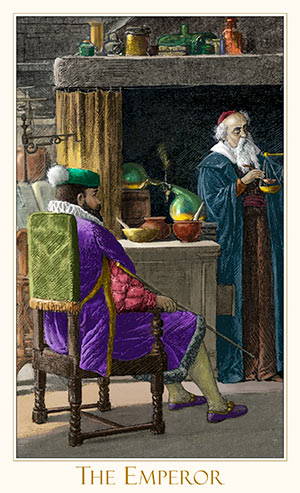 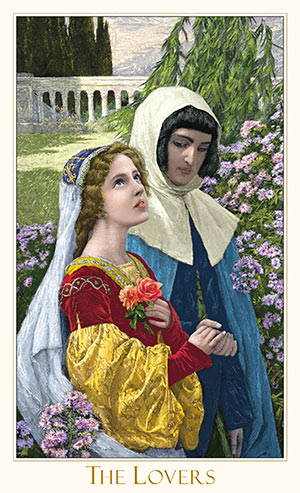 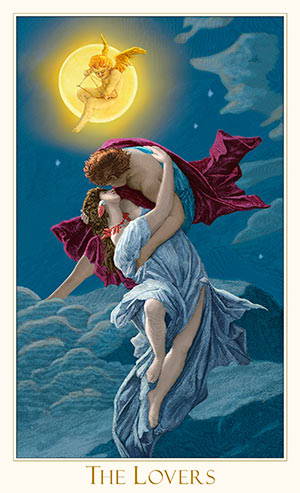 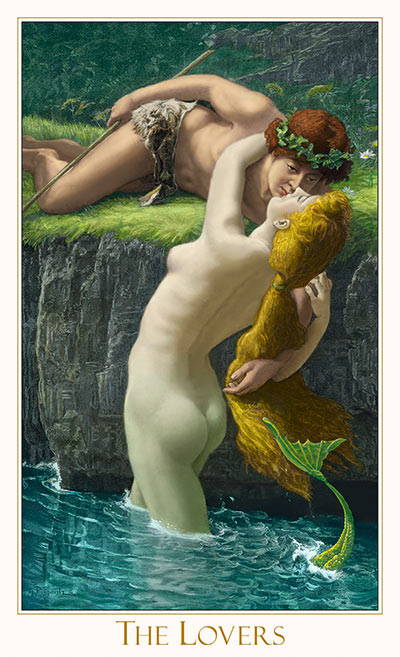 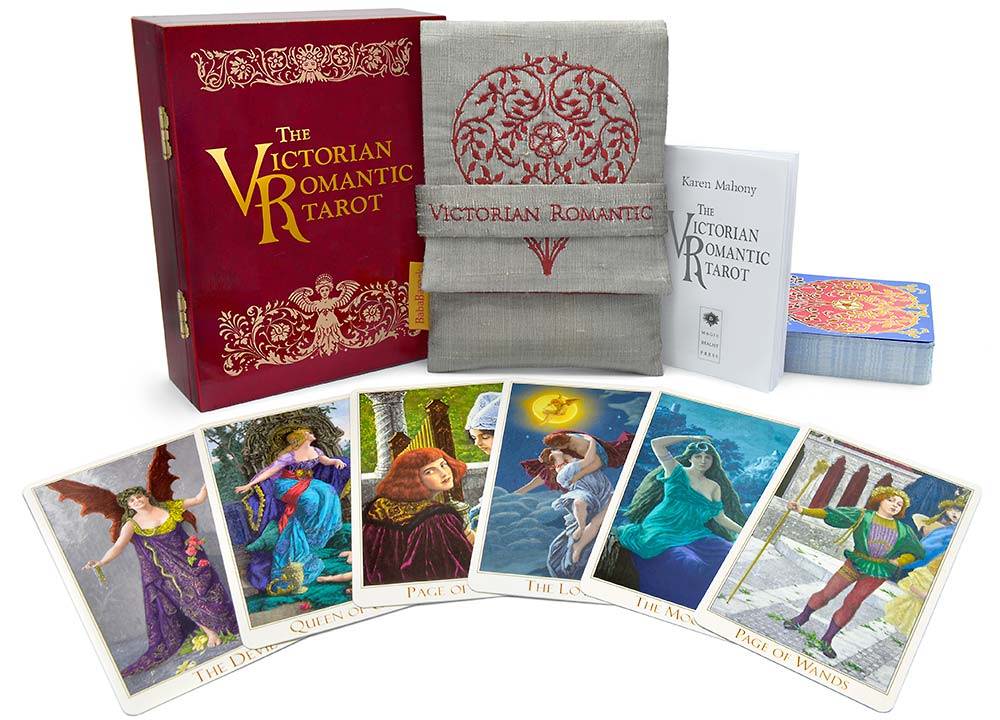 For the first time ever, we will be issuing the standard deck with a hinged wooden box. This fourth edition of the deck may well be the final edition (for all sorts of reasons that we are discussing in other blog posts, the studio is transitioning into other areas). This will make the deck a little more expensive, but we are keeping the pricing down as much as we can.

Can I buy a wooden box separately?
We will be selling this wooden box only with the deck. We just feel that if we sell the box separately it will cause all sorts of confusion with editions as it could then be used to house an earlier edition (which is fine until it is sold on and people are not sure which edition they are buying). We hope that makes sense.

Can I buy a printed card box instead?
No, we will only be making wooden boxes for this edition. It is impossible to order a very small amount of card boxes (minimum orders are usually around 1000) and again, it would cause confusion with the editions.

For future editions of the deck will you do card or wooden boxes?
We have no idea at this point if there will be any future editions of The Victorian Romantic Tarot. As mentioned, the studio is transitioning away from tarot, and so we just don't know at this point which, if any decks will be reprinted - there will come a point when studio time has to be devoted to our new work. If you would like to keep up to date with our design and production plans, do please keep an eye on our "coming soon" pages.

Also for the first time, we are giving a choice of embroidered bags for the Limited Edition deck. You can choose either gold or silver pure silk dupion. The bags are all made entirely by us, in Ireland and the embroidered pattern is our own design, embroidered in our studio. A lot of handwork – and love and care – goes into these. For those who are ordering the standard deck, there is also a completely new embroidered drawstring in silk velvet. It’s based on a drawing by 19th century artist, Florence M Rudland. We carefully redesigned this as an embroidery, and changed the words on the angel’s banner, which now read, “Fortune favours the fearless”. The bag will be available in two of our new silk-velvet colours and we think it’s a beauty. 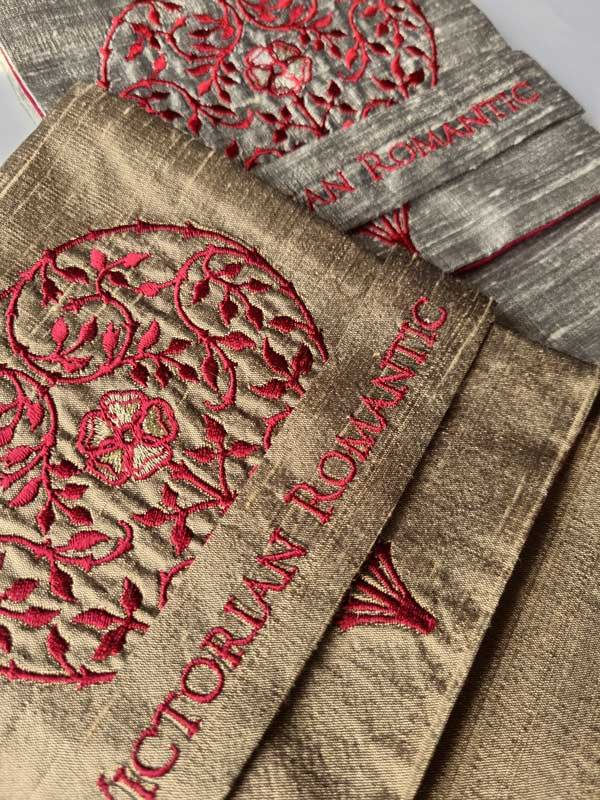 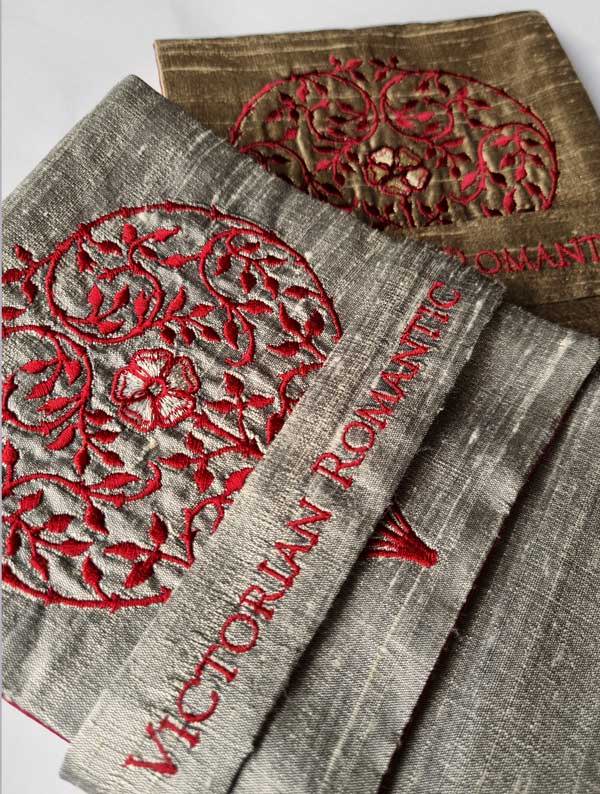 Please remember that all our work is in copyright. Please do not copy anything without our permission in writing. You can contact us HERE. Thanks!